On Friday, August 25th, the auspicious day of Ganesh Chaturthi we will also be celebrating our 10 year wedding anniversary! What a special day it will be to be celebrating such a big milestone in our lives.

Growing up in the states, Ganesh Chaturthi was one festival I do not remember celebrating the way we see depicted in the media and movies. It was not your typical Mumbai scene with thousands of people on the streets celebrating with loud music, in preparation for a huge visarjaan (the immersion of a Ganesh idol into the water). Our typical celebration was a trip to the mandir where there was a puja where we cleansed a Ganesh murti and offered him a meal, and then shared stories of Ganesh. Aside from the rituals and traditions that are followed in celebration of Ganesh Chaturthi, I think the valuable lessons for me were the stories and morals that we learned about Ganesh in the process.

One of my favorite stories of Ganpati is the one my Dad told me as a kid. He used to share why Ganesh also known as Ganpati bappa has a head of an elephant. I am sure there are many versions of this story but this is the one that I remember from my childhood. For those of you who are not familiar with the story the gist of it is that Ganpati’s father, Lord Shiva (Shanker) Bhagvan was away from home. During this time, Ganpati’s mother, Goddess Parvati was taking a bath. She had asked her son, Ganpati to block the door so nobody enters the home while she bathed. However, it was at this time Lord Shiva came home, and was angry at the sight of Ganpati as he did not recognize his own son (there is another story to this). In fury, he fought him and in the rage Ganpati was decapitated. When Parvati saw this she was enraged and immediately asked for the first head found to be put onto her son’s body. The first head that was found was that of an elephant, creating our known lord of gnana (wisdom), Ganpati.

I am hoping when my own kids are older, they too will be able to recall such stories from their childhood and more importantly, I hope I am able to do justice to passing them on. As a baby and a toddler, Toddler S had a chance to utilize his sensorial skills by putting together a DIY Ganesh Murti out of play-dough. This was a great way for him to learn about Ganpati bappa, and simply talk through his various body parts. 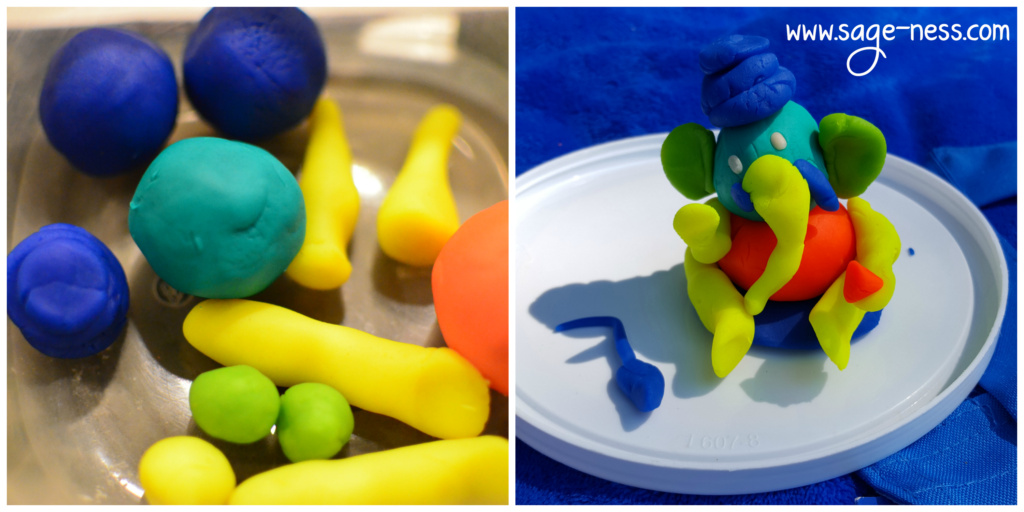 Now, as a 3 (almost 4 year old) he very vividly remembers making the murti’s the last few years so, when I told him about Ganesh Chaturthi, he has been saying he wants to make a Ganesh murti again out of “poochu poochu” (soft soft, aka play dough). To add to the activity this year, I have created these Montessori inspired 3-part cards in Gujarati & Hindi which focus on the Qualities of Ganesh. I am excited to prepare this simple activity for Toddler S this year in celebration of Ganesh Chaturthi. We will use them as traditional 3-part cards and Toddler S will also be able to do a matching exercise once we make the various parts of the Ganesh murti out of play-dough. In case, you are not familiar with how to use the 3-part cards in the traditional way, please refer to this video we created to help understand the Montessori 3-part lesson.

Download a copy of the Qualities of Ganesh, 3-part cards below. Please leave us a comment, tag me on your pictures and share your child’s journey using these cards, it is such a great motivation to see them in use! Also, if you see any mistakes don’t hesitate to let me know! These are usually being created during the wee hours of the night or while I’m keeping up with the Trio, you can see below what was going on while I was putting the final touches of this blog together earlier today.

Here is what our Ganesh Chaturthi activity looked like this year for our 3.5 year old (toddler?). This was a great next step from what he has done in the past. It was like doing a 3-dimensional puzzle. I provided Toddler S with an image of the completed DIY play-dough made Ganpati as well as all the play-dough prepared parts. He then took it upon himself to make his very own idol by referring to the image and the pieces that were available to him. This was a great Montessori-inspired activity for him. When he was done with it, he also took the pieces apart and put them away, only to come back and assemble it again later.

Check out our other Indian cultural activities for toddlers & pre-schoolers: