When I was pregnant with Toddler S, I stumbled upon the concept of  “floor beds” when I was looking into how safe it was to have a baby sleep on the floor. I did a search which consisted of the  following type of key words: “baby sleeping on floor safety”, I came across many search results which included the terms: “Montessori floor beds”. And, this was my first entry point into the world of Montessori. From this my journey, interest and research of Dr. Montessori’s work began.

So, again my goal was not to have a “Montessori floor bed” for my first born. My goal was to have a minimalistic approach in our parenting style which included the types of things we invested in. My thoughts always went back to how did our parents and grandparents do it? For my infancy and early toddler years I was in India where my parents raised me without what we in the US consider the “basics” for a newborn. There were no cribs, strollers, carseats, highchairs etc in every household with a baby back then. We slept on the floor in India, as did our parents, grandparents, great grand parents. These floor beds are called a pathaari in my native language of Gujarati which is something you lay on the floor to sit/sleep on. It really did make me wonder what was the need for some of these big ticket, and very large baby items which are used for such a small amount of time. Did we really need them? Why couldn’t we try to do it the way our parents did it? I agree not everything is possible given the lifestyle here but not having every single “basic” baby items seemed pretty normal for countries outside of the US. So, our first born, Toddler S, had a very, very basic room as an infant.

Fast forward about two years. As we got ready to welcome our twin babies, we did a lot of brainstorming on Montessori floor beds for multiples. Unfortunately, there was not much information on line on this topic. There were a few times where I was desperate for a solution and spent the wee hours of the night with Google. I came acrosss a few bloggers who posted about it at a very high level but nothing that really prepared us for what was to come! Oh what an adventure our sleeping situation was those first 4 to 9 months. It was changing by the week, some times by the day.

Here is our Montessori floor bed journey at a glance with the twins as babies – read more details about each phase below. 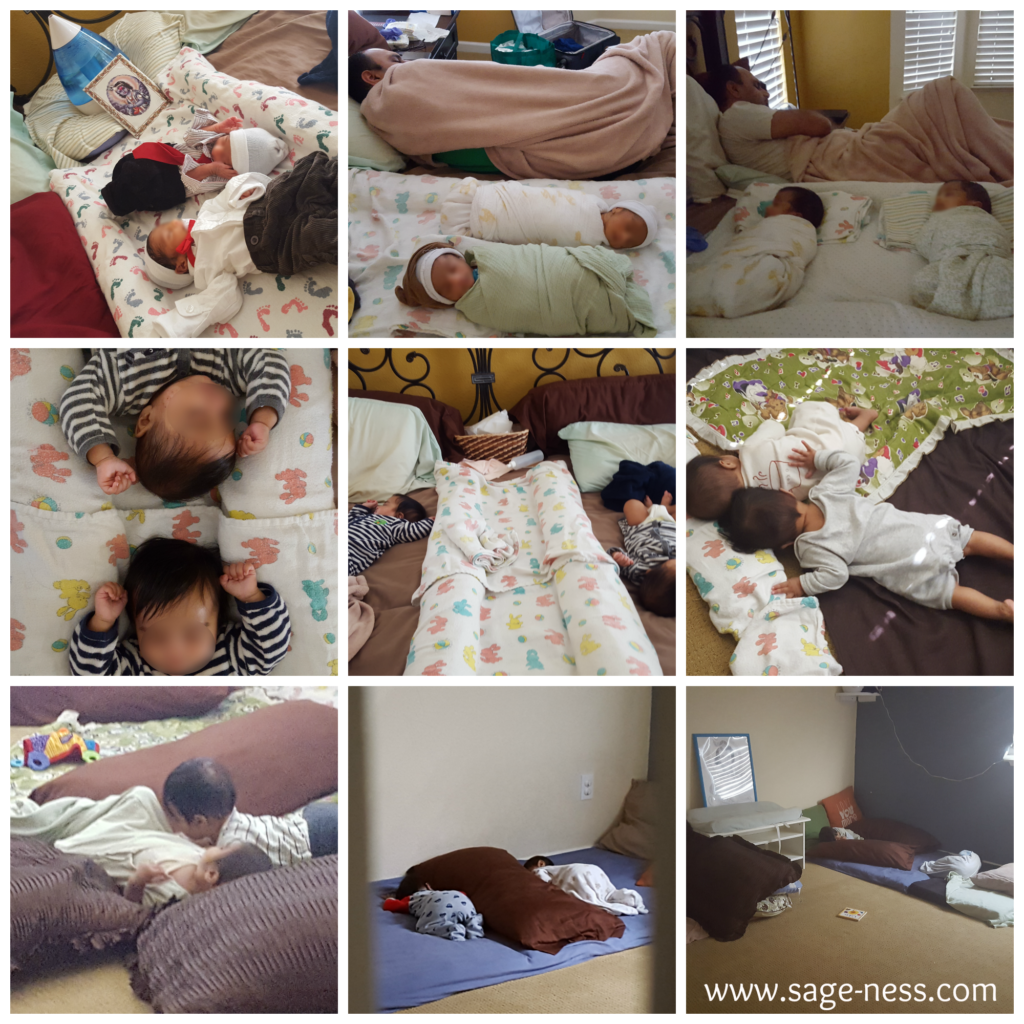 Co-sleeping with twins – about 1 to 6 months old

The first six months the twins co-slept with us on our cal-king sized bed. They started sleeping in between me and my husband, side-by-side when they were ity-bity 4 pounders. However, as they got a bit bigger, and began moving and wiggling a more, we had to move them to sleeping tandem in between us. This worked until they were about 6 months old and then came mobility. Both babies began turning over and crawling very early compared to big brother which was why we had to move them to the floor sooner. They also pulled out of their swaddles very early on. (Yes, we swaddled all of our babies the first few months).  It was starting to feel dangerous having both of them on the bed and rolling around, so to the floor they went.

As you can see below, the way we positioned the twins changed over the months. Below is between month 1 to month to about month 6, all in the same bed.

So, without boring you with more details about our very dynamic floor bed experience with our twins, I will try to depict it through pictures (whatever I managed to capture during those very zombielike months). Believe me when I say, it was SO, SO, SO hard! Cribs would have been a peace of cake compared to this but it was just something we did not want to do since our long term plan was to have floor beds for them (not to mention we didn’t own any cribs).

Since, big brother Toddler S was occupying his very empty, kid friendly room. We had the babies sleep in our room on the floor during their early days of mobility. They weren’t crawling entirely at 4 months, so having them in our room was still safe. We would occasionally put them to nap on the floor to ease them into the floor bed idea. At about 6 months they were becoming very mobile (rolling, early crawling) and it was not safe to have them unsupervised on the bed, so we transitioned them to the floor bed in our room. Although our room is very spacious and fairly empty, there were still aspects of it that were not quite baby friendly and made me uncomfortable leaving them in their unsupervised once they were awake. There were MANY instances we found them in odd corners of the room, including underneath our cal-king bed. Often they were scooting in their sleep, bumping their heads and waking themselves and each other up. At about 9 months we had to explore other options the twins sleeping situation because nap times were becoming stressful and night time sleep was being sacrificed. 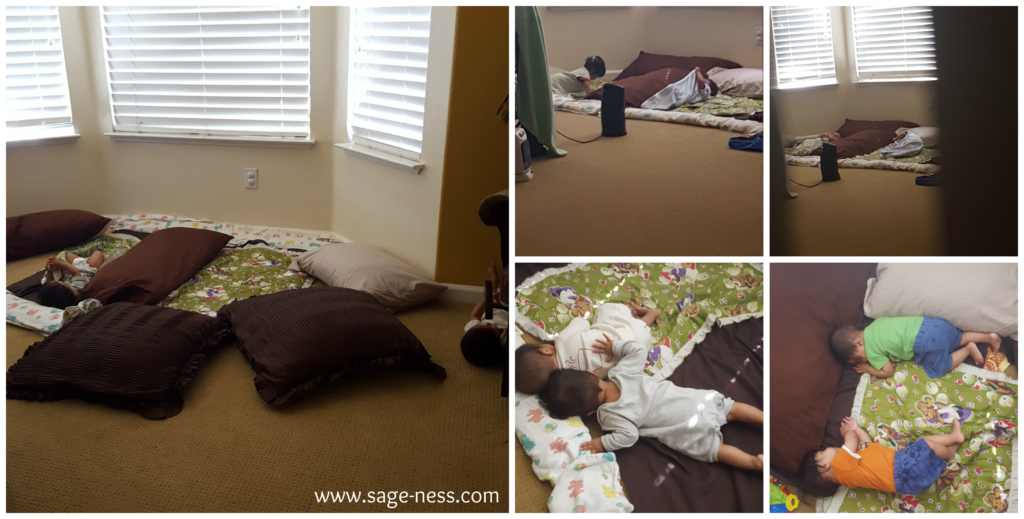 We were desperate for sleep and more concerned about the babies safety. Unfortunately, we had to give a confined space a try because both babies were getting into stuff in our room which is not a completely “safe-zone”. For the record this was a disaster. We tried it for about 2 weeks and realized it was just not something we were comfortable with. The babies were not happy being constrained (I don’t blame them) and I couldn’t bare to see it how unhappy they were. We don’t own a pack ‘n play or anything of the sort so we made do with what we had which is a large play yard which we used as a safety gate when Toddler S was a baby. It was a versatile gate we used to block off a variety of areas, especially when we had guests visiting with younger children. (On a brighter note, it is a very versatile gate and has many uses. I highly recommend it for blocking off any large areas, we have a very wide staircase.) 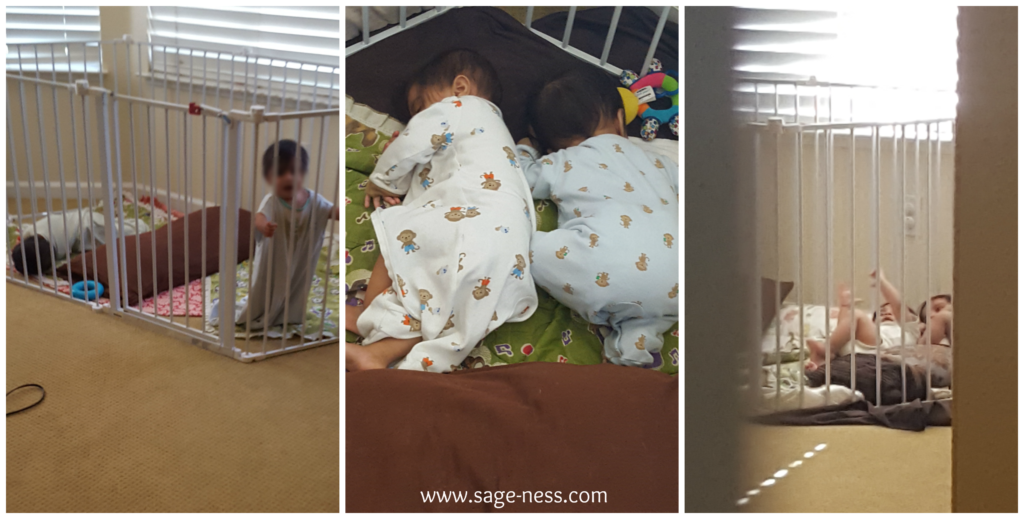 This is our current set up for the twins in their room (formerly Toddler S’s room): 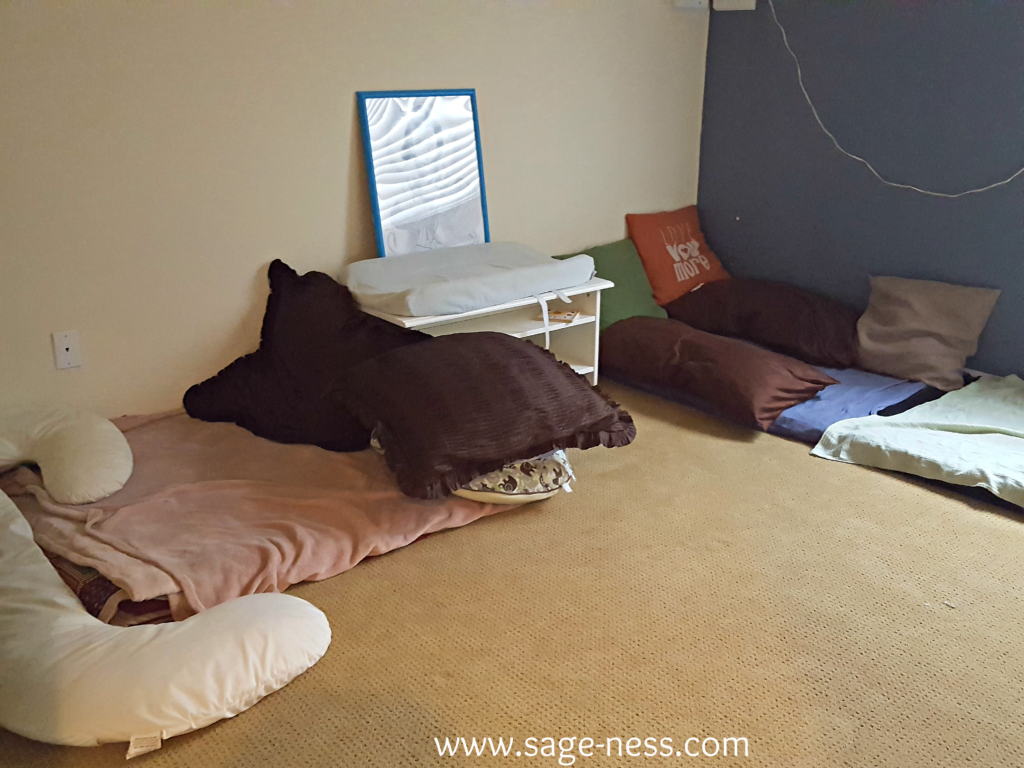 Prior to this we had them on one sleeping space, but that did not always work if one was in a light sleep which was why we created the separate space for both.

One thing we learned quickly after a few nights of loud thuds and some bruises is that we needed to block off the door because we would often find the babies banging their heads on the door. We also have abruptly opened the door at the sound of crying to only find a baby curled up right against the door – oops. We did get into a better habit of checking the video monitor before going in but during those zombie nights, instant reaction was to dash in. But these make shift door blocks/dividers were a life saver. It did the job (until recently, they learned how to climb and flip over them, it’s quite the site). It quickly became a gross motor activity for big brother!

We learned a lot from our journey and I’m pretty sure every family with multiples has to live through their own experience in this department. Every situation is so unique and different let alone each baby (in this case two!) is so different. None the less, here are some take aways to hopefully, help other families who plan to use a Montessori floor bed with their twins and/or multiples.

Keep in mind when you have floor beds for twins and they are in the same room, things can get very, very tricky. And the whole process is very taxing because one will wake the other, and you will eventually have two babies in your lap. Having two babies to put back to sleep in the middle of the night when you are already sleep deprived, nursing around the clock and trying to function at your 100% for your toddler (and babies) during the day, all of this can really test every ounce of you. Not to forget, my very supportive husband, would also be up around the clock at night and had to be at work the next morning. Be prepared to make changes as you need to and do what works best for your family and sanity!

The following list is what helped us in our Montessori floor bed journey for our twins: 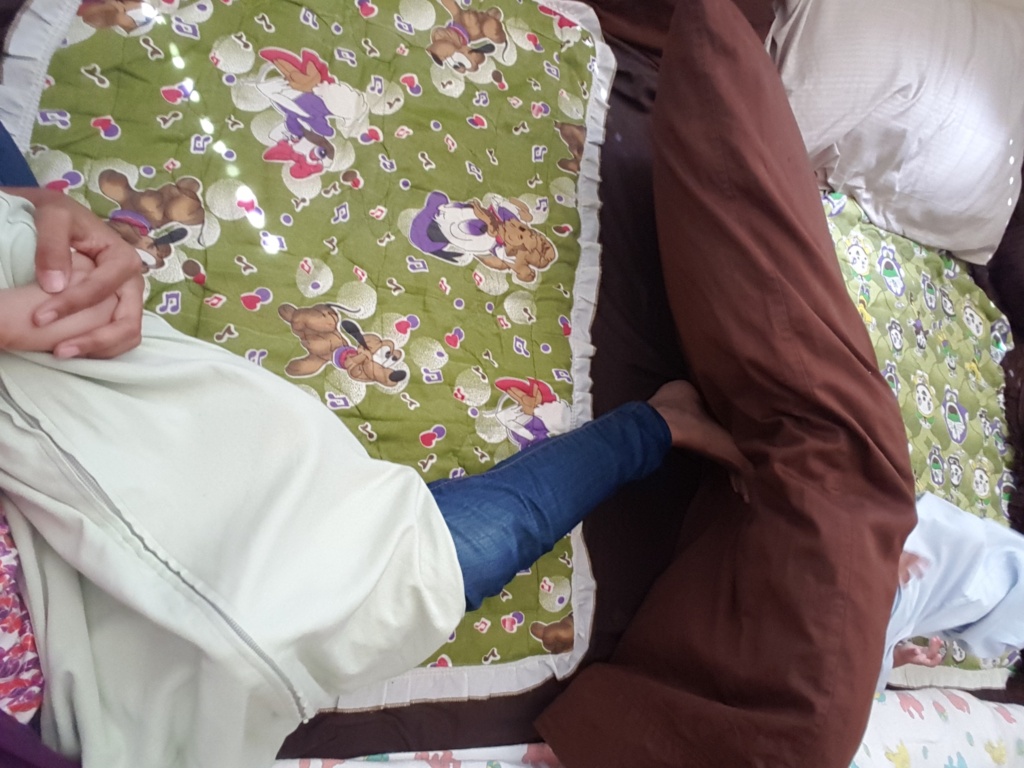 I know some of this may not align with the Montessori principals, but with the twins we had to change our approach for everyones sanity. With Toddler S we did not need to sleep train and we were able to work through the challenges of the floor beds and everything in between but with the twins it was a whole new ball game. I am so thankful for where we are at now. Both of the babies sleep in the same room, on their floor beds. Big brother has graduated to a queen size bed in our guest room and mommy and daddy are sleeping through the night. Success!

At 13 months, the twins loved waking up and playing together while they wait for one of us to come get them. Over the last few months we have found them on MANY occasions snuggled up next to each other despite their respective spaces. At close to 15 months, they always end up sleeping right next to each other no matter where we put them. It’s so special to see them bond, and share a room together, after having shared a womb for 9 months!

I remember feeling so desperate for answers on how to make a floor bed work with twins, so I really hope this post comes in handy for other families in a similar boat! I would REALLY love to hear from other families who have done floor beds with multiple children in one room. How did you set it up? How did you handle night wakings? What was the one must have to make it work for you? 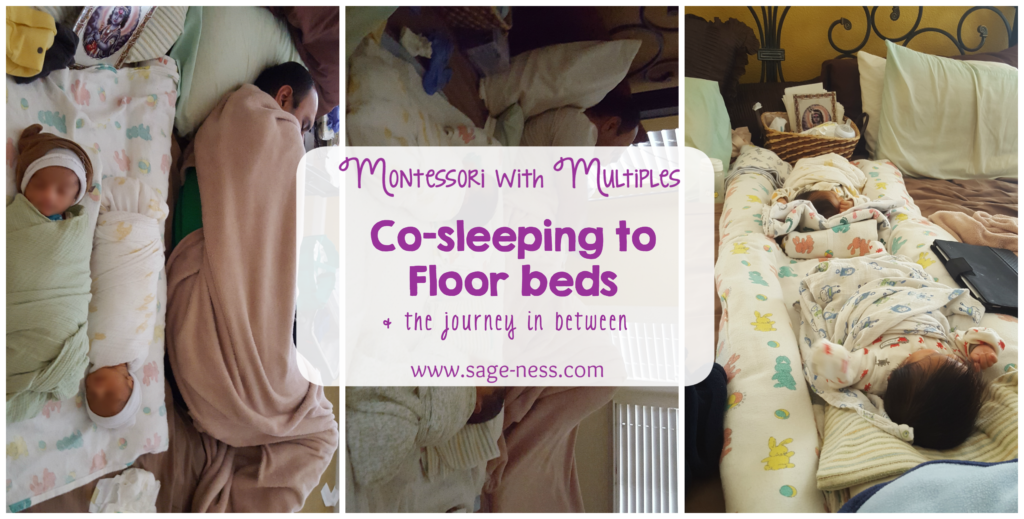 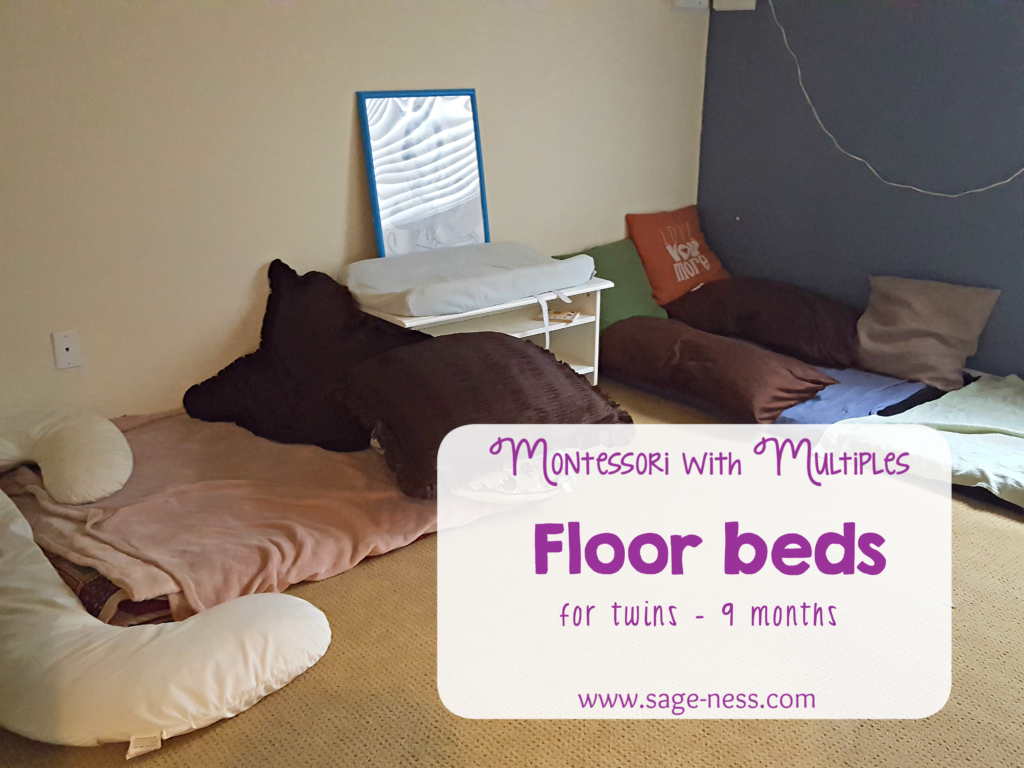 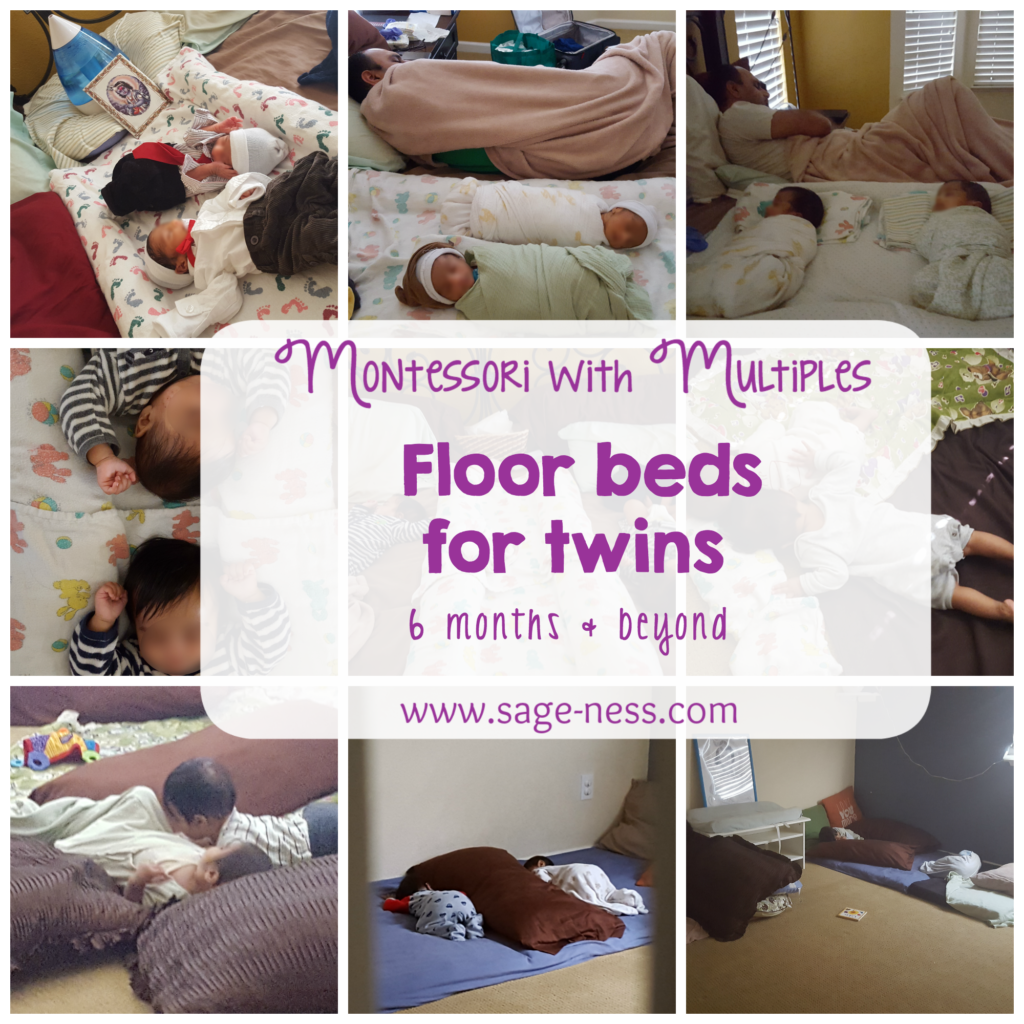