Life with 3 kids has been unimaginably busy. I mean I read and read about it. I mentally prepared myself. I kept telling myself (and hubby) that it’s going to be really busy. But as with many things in life, you can onl prepare so much. No amount of preparation can truly get you ready for all the changes that come to your day to day lifestyle when your family grows.
It’s funny because, I remember many people saying, when they had their second child, that it’s not double the work, it’s exponentially more work. Now try to imagine a second and third child together, no really you do the math! You can’t unless you’re going through it. It’s the sleepless nights, having a meal before brushing your teeth, having breakfast for lunch, warming up your tea/food a gazillion times only to have it sitting in the microwave hours later, not remembering which childs’ diaper you just changed, whether you’re holding this baby because he was crying or because you were burping him, trying to nurse one, rock the other and entertain the third, trying to have a conversation with your husband only to realize you’ve not been able to get more than a few words in before one of you are interrupted by one of the mini-me’s. Once you live and breath these moments day-in and day-out, you realize just how much more it is to your day. It’s not double the work, it your whole, entire being.
Every moment is accounted for from the moment you open your eyes. The twins are hungry every 2 to 3 hours at the least. And of course if they’re eating that often there will be diapers just as often, if not more.
The acronym MoM (Mom of Multiples) has a new found meaning and respect. To be clear, my version of MoM is moms who have twins, trips etc (thanks to the name of a Facebook group I am a part of for twin, trip moms). But all moms with more than 1 kid knows how different life becomes and almost how simple it really was with one kid, let alone no kids.
I clearly recall life before the twins arrived.  My day was split into before toddler’s nap and after toddlers nap. I used to think about what all I would accomplish once the toddler was napping. How many shows I can squeeze in? How long could I chat online? Surf the web? How many meals can I cook? How many loads of laundry can I wash & fold? A lot could be done in those 2 to 3 hours. In hindsight, those few hours, I had all the time in the world.
Life with twins & a toddler is still split into before toddlers nap and after toddlers nap. However, before toddlers nap is filled with many sub-naps aka twin naps, plus SO much more!  And now rather than looking forward to what I can accomplish during nap time, I’m working on getting two more to sleep in hopes to have 3/3 asleep so I can eat my lunch, pee, or just have a moment of silence. Everything else drops way to the bottom of the priority list as I have no energy left to do anything productive during this time (at least at 10 weeks post partum). I still do manage to make myself lunch or at least throw in a load of laundry. The first few weeks though I would just knock out. Those 2 hour nighttime feedings would catch up to me during the day. I think people forget that the difference with having twin infants, is you can’t just lie there with your newborn when your toddler is napping because you’re constantly on the edge about the other one waking up or needing you at the same exact time the other one wakes up. You’re also working on keeping them on the same schedule. So, as soon as one is asleep, you are on a mission to put the other one to sleep which of course fails when you it needs to happen under pressure. And then, if one wakes up, rather than sighing in relief that only one is awake, you are paranoid that they will be out of sync so you then wake up the other one too.  What a catch 22, right?
So the next time you see someone with twins, think twice before you say, “oh how fun!” Because you probably don’t know how many other children they have and there is a high probability your idea of fun is very different from the reality they’re living! Life with more than one kid is not double the work, and life with twins is not just fun, it’s a lot of work! Throw in a toddler or more kids and you can say good-bye to your spare time.
But I must say, seeing the three of them together is my idea of fun :). 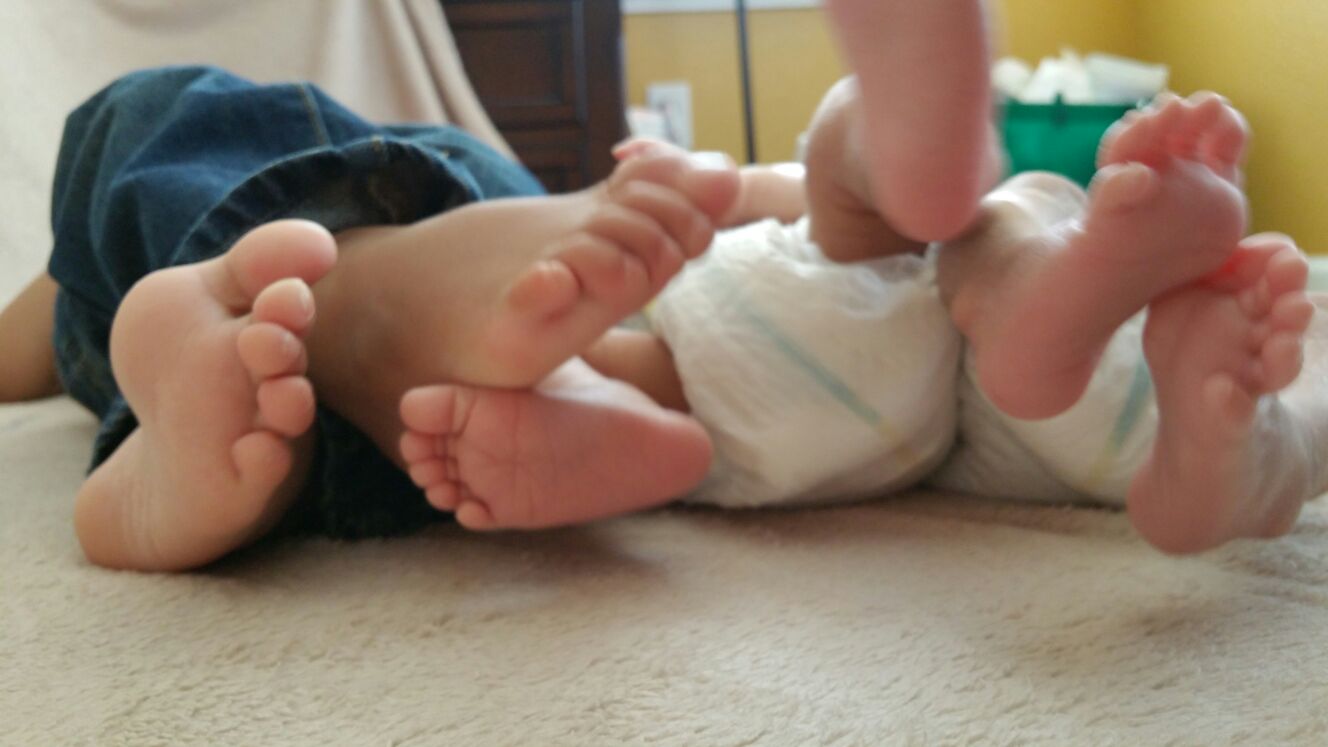