For the month of February, in the spirit of Valentine’s day, our learning theme for Toddler S was Heart(s)! We don’t really celebrate Valentines Day but I know many schools celebrate it and since it such a commercially glorified day with hearts plastered everywhere, it is hard to skip right over it (maybe next year we can learn about the history of it!).  So, we dug right into the heart! Not only did we do some fun Montessori inspired arts and crafts with the  lovey-dovey shape of hearts ♥ ♥ ♥ but more importantly we learned about the human heart and how it fits in with the other organs of our body.  The human body is definitely a big topic for a little human so we worked on it two days a week (and any other times Toddler S showed interest) during the month of February. This was a fun activity for pre-school toddlers and even older kids who are interested in learning about the human body as it pertains to their own body.

Below there is a break down of what Toddler S and I  focused on when we learned about the human heart and how we broke it down into a month-long activity. He showed such a great interest in the topic and was curious to learn more. His interest in how to keep our heart healthy and what it needs is what sparked a few of the subsequent activities about healthy eating. 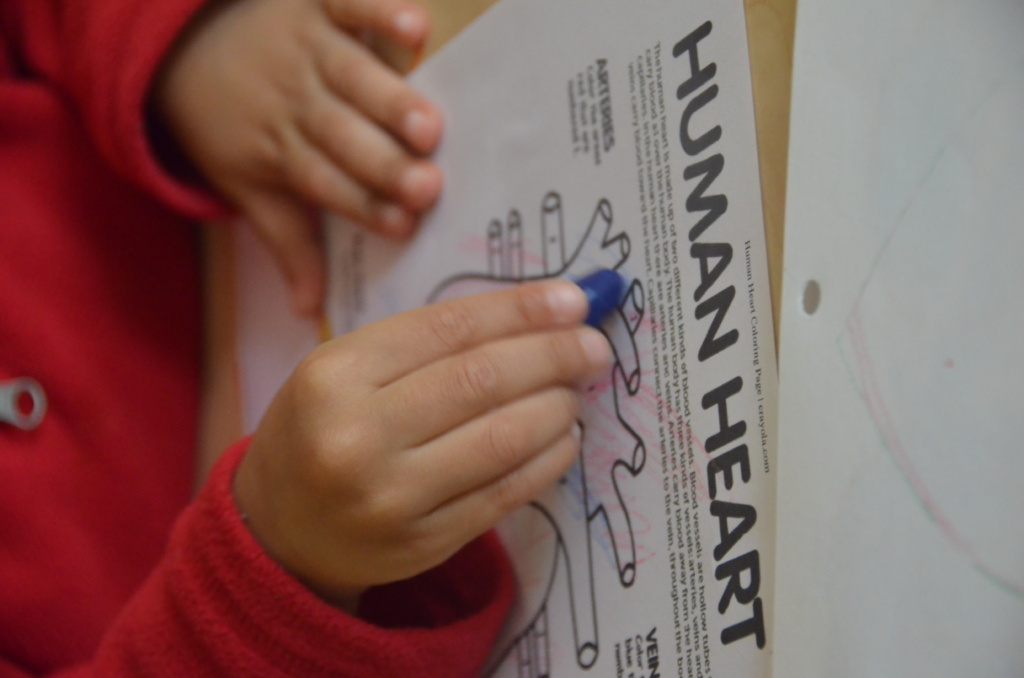 On our second day, Toddler S was so excited to unroll his traced human body. 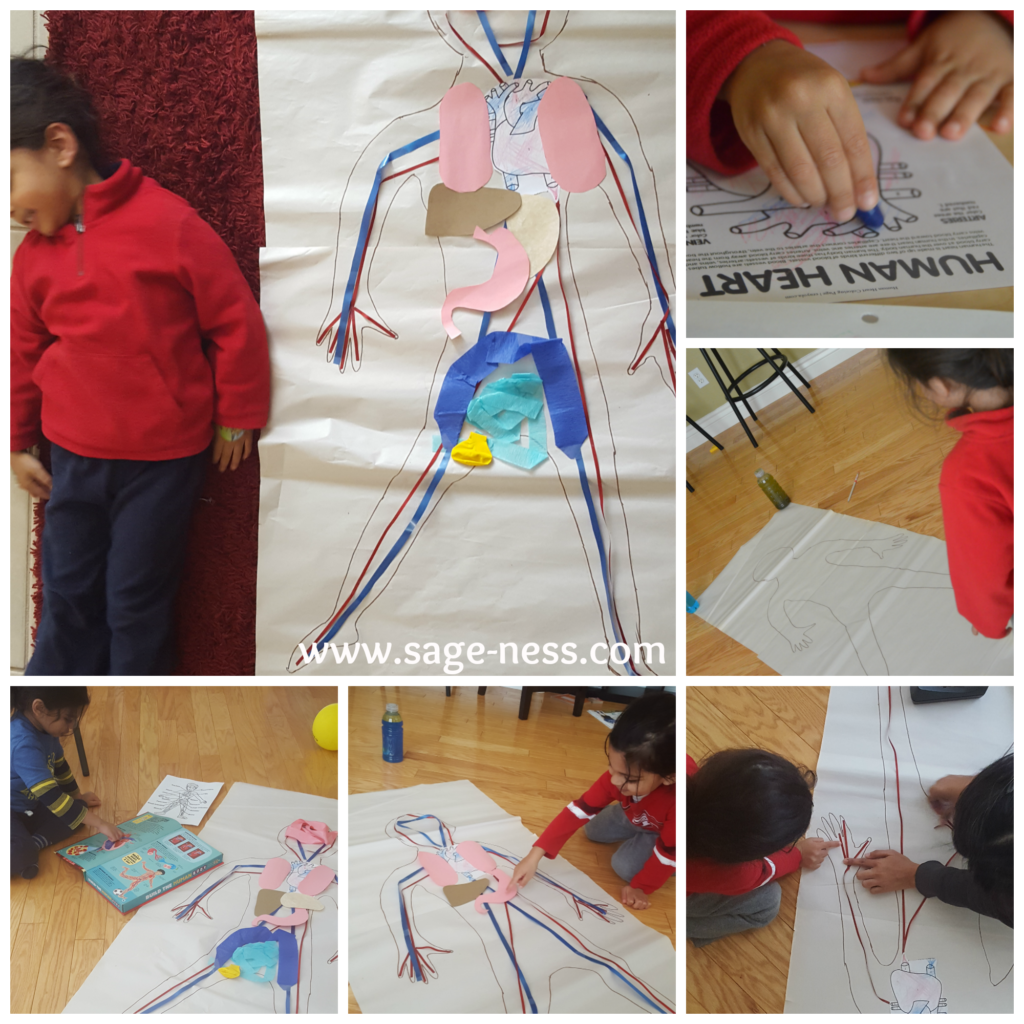 Over the last few weeks, we had been talking a lot about what our heart needs to be healthy.  Toddler S was so interested in the various food categories (grains, proteins, fruits, vegetables & dairy) that every day he would ask what category the food he was eating belonged to. He also showed an interest in what vitamins each food had. Mommy was not prepared for this but we made a fun activity out of it.

3. Activity – We went to our mail stash and found the local grocery store ads. Toddler S loves using his scissors, so he enjoyed identifying various fruits & vegetables and cutting them out.

4. Toddler S then sorted his cut outs into fruits & vegetables 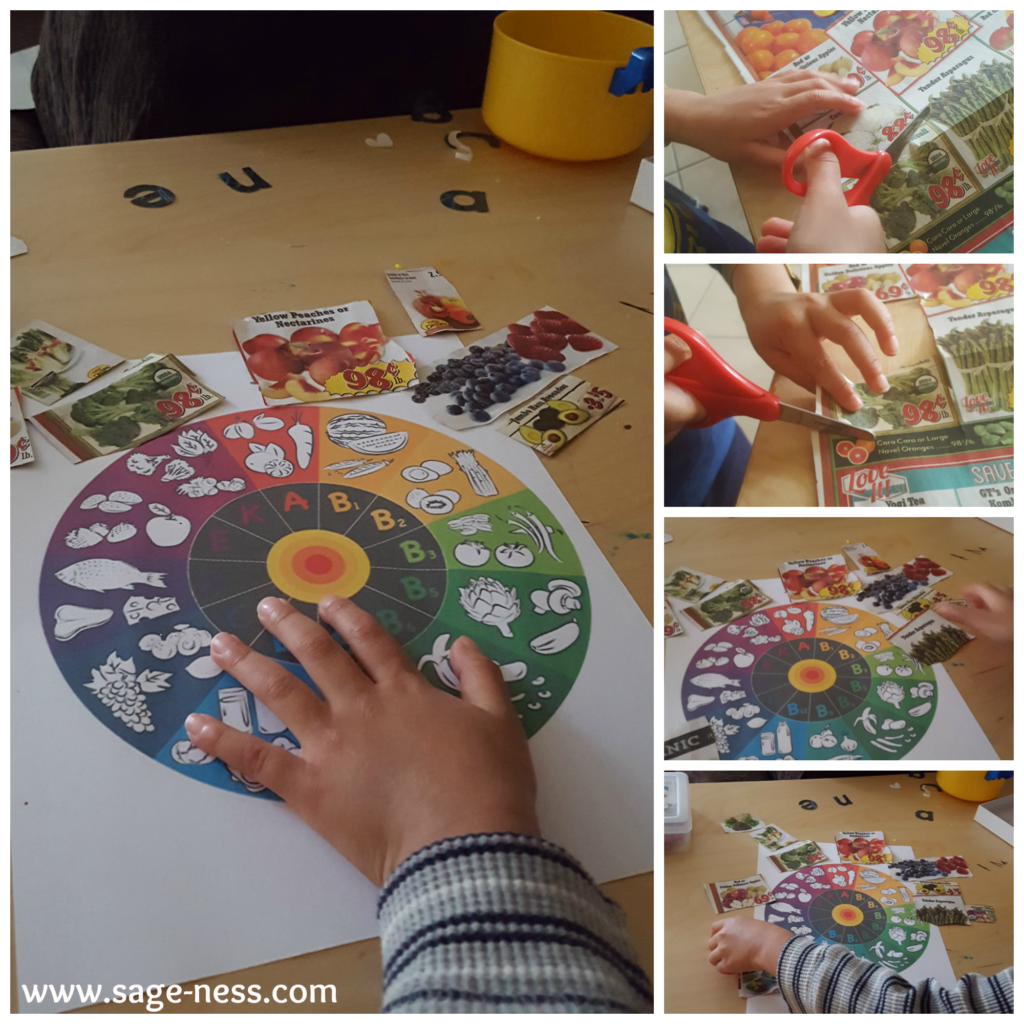 We didn’t have time to do another library trip which I was hoping to squeeze in as I wanted to get a few more related books. But we worked with what we had and it was perfect! This week we did a lot of review of the prior weeks to wrap up our Toddler study of the human heart and organs. We also pulled out one of Toddler S’s favorite Yoga books that we were gifted and focused on the element of exercise. Fortunately, after weeks of rain we also were able to squeeze in a jog to the park where Toddler S was able to get his heart pumping and feel his pulse rate rise too!

Through the month of February as Toddler S explored the human heart through his very own body. I very much wished to set up some trays for him with 3-party cards and some additional material, however, I just did not have the time with the baby twins on hand and the day-to-day household “stuff” that needed to get done. So, we took it one day at a time. And like most of our days, we bring the Montessori approach into our work. This exploration of the human heart involved many aspects of Montessori concepts. Although I was not necessarily able to create the perfect “set-up” for Toddler S, this worked for us and the way we do Montessori in our home. 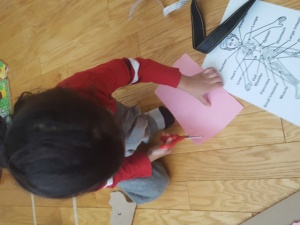 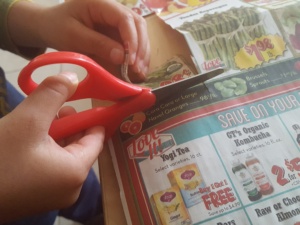 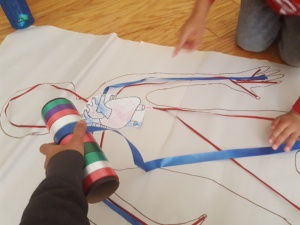 As he showed interest in the various body parts from his visual references, I used the 3-period lesson to introduce each organ.

Trays: The organs that we made and the fruits/vegetables Toddler S cut out did go into trays on his shelf. This became trays he picked up to work on during the week. Ideally, I would have made these into trays ahead of time but this worked out just fine for us. You can also use actual fruits and vegetables for them to sort, play fruit/vegetables or invest in some of the Toob toys which were on my list of purchase too. 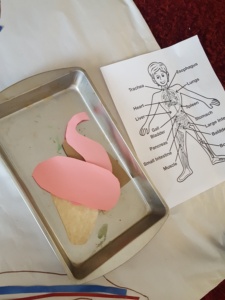 Organs: He would also pick up the organs tray with the human body visual print out and arrange the body parts on the piece of paper or on his traced body while reciting the names and functions. 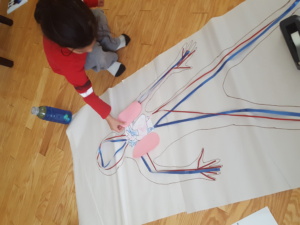 Fruits & vegetables:  He would spend time sorting the fruits and vegetables into colors or by fruit vs vegetable. He also loved talking about what vitamins each may have.

“The essential thing is to arouse such an interest that it engages the child’s whole personality.”